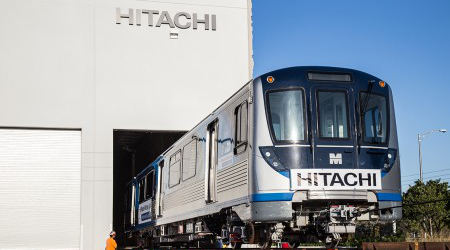 Hitachi Rail Italy this week delivered the first of 68 trains to Miami-Dade Transit.

Before it left the Medley plant, the train went through a series of tests, including the verification of proper assembly and functionality of subsystems. Hitachi also tested the train's heating, ventilation and air conditioning, lighting, and propulsion.

Following the first phase of operator training, the company will initiate a dynamic test phase with the train running first on test track and then on the main line during night shifts and weekends.

That phase of testing will demonstrate the train's performance running and braking at maximum speed and in different weight conditions.

The second and third coupled trains are undergoing pre-qualification tests at the Medley plant. They're expected to arrive at the Lehman Center between June and July to complete dynamic testing.