Brightline trains to run on biodiesel 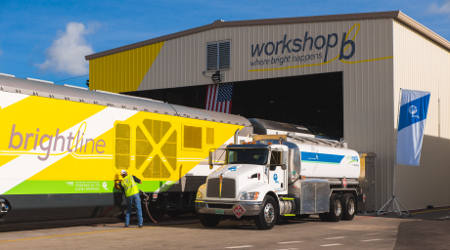 Brightline has formed a partnership with Florida Power & Light Co. (FPL) to provide clean biodiesel to fuel the company's trains.

Under a two-year contract, FPL will supply Brightline with 2 million gallons of biodiesel-blended fuel annually. The fuel is a cleaner-burning replacement produced from renewable sources like corn, soybeans and used cooking oil.

Brightline's trains are powered by Siemens Charger locomotives and are equipped with fuel tanks designed to contain up to 2,200 gallons of fuel. Each trainset includes two locomotives and four passenger cars.

The trains are estimated to consume fuel at a rate of 2 gallons of fuel per mile, which means the 67-mile one-way trip from Miami to West Palm Beach, Florida, would consume 134 gallons.

FPL uses biodiesel as the primary fuel source for more than 1,750 vehicles in its fleet. The company has been using the fuel for almost two decades.