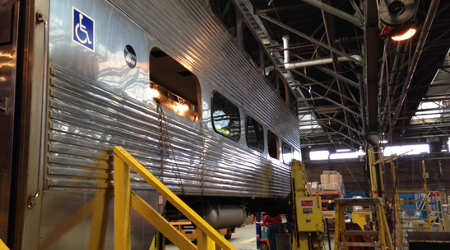 Metra's board yesterday approved a $29.4 million contract to renovate and expand the mechanical shops that house its rail-car and locomotive rehab programs.

The railroad awarded the contract to Chicago-based construction firm F.H. Paschen, S.N. Nielsen & Associates LLC. The improvements are aimed at enabling the railroad to significantly increase the output of its rail-car rehabilitation program, Metra officials said in a press release.

Expected to take nearly two years to complete, the project calls for expanding the 49th Street Coach Shop on the Rock Island Line. The work will include an upgrade of the facility's loading dock, storage and rail-car wheel truck rebuild area, along with the addition of training facilities.

In addition, the renovation project includes improvements to the shops' parking, drainage and utilities. When the project is complete, Metra will have the capacity to rehab 60 rail cars each year, up from 35 cars at present.

"This will help us make significant strides in moving toward a state of good repair," said Metra Chief Executive Officer and Executive Director Jim Derwinski in a press release.

To learn more about Metra's in-house rail-car rehabilitation program, read this feature from Progressive Railroading's May 2016 issue. For a look inside Metra's 49th Street shop, view this photo gallery.