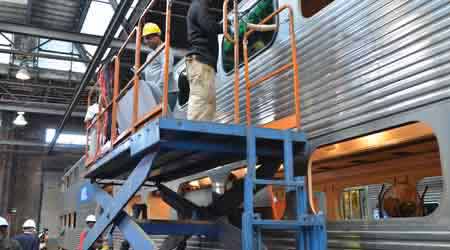 An electrician works on one of the Amerail rail cars being rehabbed at Metra's 49th Street shop in Chicago.

By first-quarter next year, Metra expects to wrap up a six-year program to refurbish 176 Amerail passenger-rail cars that were built between 1995 and 1998. The $115 million project is expected to extend the life of the 79 cab cars and 97 trailer cars by up to 15 years.

What's unique about the effort is that the entire project was completed by Metra's own workers at the Chicago commuter railroad's 49th Street car shop along the Rock Island District Line. Rehabbing the cars to extend their use and doing the work in-house rather than buying new units or sending them to an outside contractor is saving tax dollars and preserving Chicago-area jobs, Metra executives say.

Metra is one of few U.S. commuter-rail agencies with an extensive in-house car rebuilding program, in part because it retains the facilities and space to do so, Metra officials say. Built shortly after World War II, the cavernous 49th Street shop features enough room for four rail cars to be worked on at the same time. Metra acquired the shop when it took over the now-defunct Rock Island Railroad's operations in 1983.

Taking a DIY approach isn't the only way Metra has been able to stretch its car-rehab budget. Before the first Amerail car was overhauled, the agency spent about a year setting up a streamlined assembly-model process known as "multistation manufacturing" that has helped keep the project on time and prevent cost overruns. Assisted by Nippon Sharyo USA Inc., Metra set up a four-station system at the 49th Street shop, where a group of carmen, electricians, machinists and sheet metal workers strip a rail car to its shell and reassemble it with new or refurbished parts and features.

After adapting to the new production process, the shop's 60 employees over time became more efficient at each task. In the Amerail project's early days, it took crews about 40 days to overhaul a car. Six years later, they've cut rail-car overhaul time to 32 days.

To establish a multistation manufacturing model, the agency needed organized labor's cooperation. At Metra, the unions have been on board with transforming the 49th Street shop to a more efficient production system, says Metra Chief Executive Officer Don Orseno.

"It's been a win-win for everyone," Orseno says of the process. "This project has kept the jobs and the work in Chicago, which is a plus for us all."

The system also has helped the shop’s employees sharpen their craftsmanship and work skills.

"It's a good thing for everyone when we can grow our own people," says Orseno, noting that the shop’s workforce includes apprentices who train alongside mentors and journeymen craftspeople.

The cost for the in-house rehab is about $650,000 for materials and labor per car, Metra officials estimate. Although cost comparisons for outsourcing the rehab work aren’t available, buying new cars would have cost the agency $2.5 million to $3 million per car, agency officials believe. Also, by extending the life of the Amerail cars, Metra hopes to get nearly 50 years of service out of the cars before they're retired from service.

Another advantage of using in-house teams: Should a rehabbed Amerail car require fixing down the road, the workers will be familiar with the entire unit because they disassembled and reassembled it, Orseno adds.

Although the multistation manufacturing system has been in place only since 2010, the shop has housed Metra's rail-car modernization efforts for decades, says Lexie Walker, manager of Metra's capital projects.

"There was an overhaul and rebuild program going on at the shop, but the processes and procedures weren’t in place like they are now for the Amerail project," she says. "There were a lot of things that we implemented to gain control over the program and create efficiencies."

Upon entering the shop floor, workers can view a large bulletin board papered with charts that detail when a car comes into the shop, all the steps taken to rebuild it, and when it leaves the shop. Binders are kept at the stations where details of tasks required and performed are recorded, and a quality checklist is reviewed and approved by foremen. Recording every step of the process and maintaining those records ensures all tasks are completed, and enables Metra to track performance, Walker says.

The shop's four stations are organized by letters A, B, C and D. Workers are assigned specific tasks at each station; the cars are moved to the next station as workers complete tasks.

Station A is where teardown occurs. Workers rip out the car’s flooring and remove the seats, windows, doors, bathrooms and heating system. The metal, accordion-like diaphragm that connects two cars is replaced with a rubber one. Workers also re-install the windows and lay down new composite flooring. The stairs are cleaned, repaired and polished. Electrical boxes are rebuilt and the train’s event recorder is replaced.

At Station B, the car is hoisted up by a jack. Air conditioning units are removed and overhauled. The wheelchair lift is taken out and replaced with an upgraded model. A new toilet tank is welded under the carriage. If it’s a cab car, a new battery charger and battery box are added. Much of the interior electrical work is done at this stage, with new wiring run throughout. Heating and lighting are installed, and electrical outlets for passengers’ personal use are added to nearly every seat.

Next, the car is moved to Station C, where much of the interior work is completed. The car goes back onto its now-rebuilt wheel assembly, and AC units are put back in. New seats, LED signs and a passenger emergency intercom system are installed. The bathroom is assembled with new stainless steel walls, toilet and sink.

Finally, the car is moved to Station D, where everything is tested and checked for quality.

"If the car gets final approval from our quality department and passes its final inspection, at that point it gets pushed out the door and sent off to whatever district it came from," says Walker.

After moving through Station D, the cab cars spend eight days being fitted with components that are required for positive train control implementation.

After the last Amerail car is modernized early next year, crews at the 49th Street shop will start the first phase of a multiyear project to rehab 302 bi-level Nippon Sharyo cars that Metra acquired in the early 2000s. The multistation manufacturing process will be used for that project, as well, and is being phased in at Metra’s KYD (Kensington Yard) Maintenance Facility, where the agency is rehabbing 41 older Budd rail cars. Metra also intends to introduce the new production model at its locomotive facility.

With so much rehabbing going on and more in the pipeline, the 49th Street facility itself needs some work. Expanding the shop is included in Metra's capital budget for 2018, Derwinski says. He puts the expansion cost at a "ballpark estimate" of $20 million.

At 302 cars, the Nippon Sharyo car rehab program will require even more staff, as well as additional storage for materials. The shop has room to rehab about 30 cars a year, and Derwinski would prefer to see that number double.

The shop also serves as a site for training workers in certain certified skills as required by the Federal Railroad Administration (FRA). The need for more training space will increase under new FRA regs for certifying and recertifying rail-car inspectors.

As for the car rehab program, Metra will continue to fine-tune the multistation manufacturing model, Walker says.

"From my perspective, this [Amerail] program lived up to expectations," she says. "We saw a dramatic streamlining of the production process. … We hope that in the next rehab program with the Nippon Sharyo cars, we'll find even more efficiencies and make the process even better."