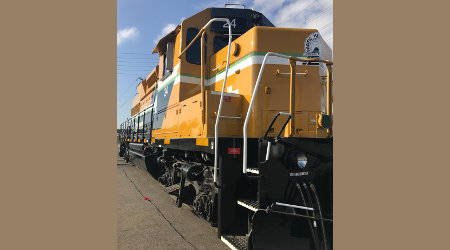 Pacific Harbor Line Inc. (PHL) and Progress Rail yesterday hosted Port of Long Beach and American Association of Port Authorities officials for a look at the EMD24B switcher locomotive that PHL will lease for use on its line.

Progress Rail's EMD24B has been completing its California Air Resources Board verification testing with PHL, and the companies announced that as a result, PHL has confirmed it plans to lease the unit, according to a Progress Rail press release.

The unit, a Tier 4 that meets lower emissions standards set by the U.S. Environmental Protection Agency, will be operated in and around the port area once the verification testing has been fully completed.

"PHL is pleased to work with Progress Rail once again and looks forward to leasing the new EMD24B, not only for its performance, but also to continue to create awareness of the need for implementing greener technology in the ports," said PHL President Otis Cliatt.

The unit is powered by a Cat 3512C HD engine. Progress Rail is a subsidiary of Caterpillar Inc.