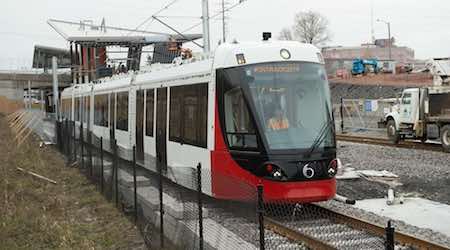 The first unit assembled in the city began testing on track between the Blair and Cyrville stations, Transport Canada officials said in a press release.

One initial test involves affixing foam pads to the vehicle as it operates along the alignment to ensure adequate clearance is maintained from overhead wires, poles and tree branches.

Testing between Blair Station to Tunney's Pasture will continue until the Confederation Line launches in 2018. The line, which will cost 2.1 billion Canadian dollars, is funded being funded by the government of Canada, the province of Ontario and the city of Ottawa.

Alstom is providing 34 Citadis light-rail vehicles for the route, 33 of which are being assembled in Ottawa.

The Rideau Transit Group is the private-sector partner responsible for the designing, financing and building the line. The 7.8-mile line includes 13 stations and a 1.6-mile tunnel aimed at reducing congestion in the downtown core.