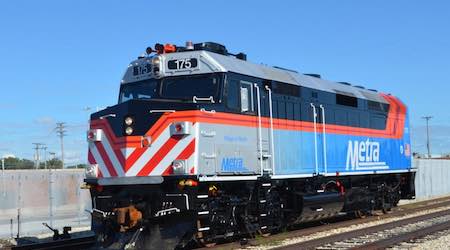 Metra has returned to service the first locomotive rebuilt under a $91 million remanufacturing contract.

The Chicago-area commuter railroad in 2015 awarded the contract to Progress Rail to rebuild 41 EMD F40PH-2 and F40PHM-2 locomotives, which were originally manufactured between 1989 and 1992.

Expected to extend the life of the locomotives by 10 to 13 years, the work is being carried out at Progress Rail's facility in Patterson, Ga.

The rebuilt locomotives, which will be designated as F40PH-3s, will feature a new high-voltage cabinet with a microprocessor system, remanufactured engines upgraded to stricter emissions standards, and new and reconditioned accessories.

In addition, the cars' trucks will be rebuilt with new wheels and positive train control components, Metra officials said in a press release.

Due to the age of Metra's fleet, the railroad has made the modernization of its rolling stock one of its "highest capital priorities," agency officials said. By the end of 2016, the railroad will have renovated about 70 cars in-house and plans to expand its rehab facility to service more cars each year.

Also by year's end, Metra will modernize about a dozen locomotives, with some of the work being done in-house and some by a vendor.

The agency's in-house rail-car rehabilitation program, which was profiled in the May issue of Progressive Railroading, is the largest and most productive of its kind nationwide, Metra officials said.