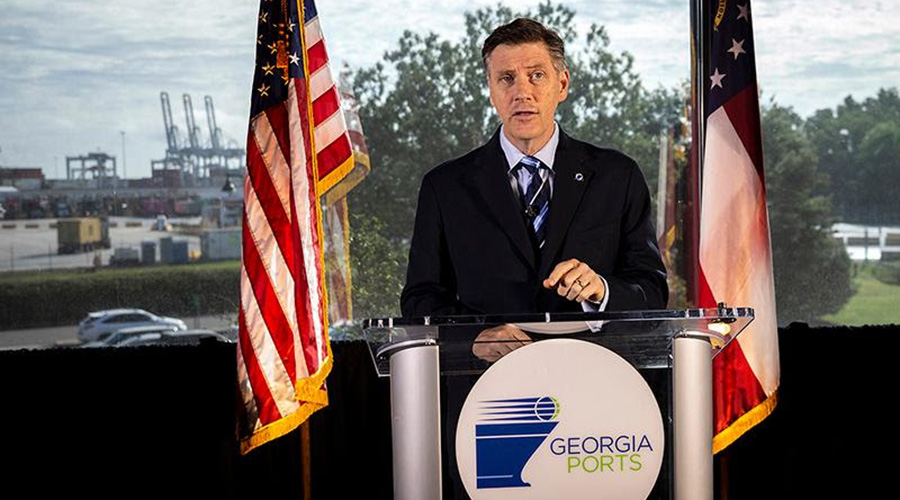 The Port of Savannah handled 1.2 million 20-foot-equivalent units (TEUs) of cargo during the first quarter of fiscal-year 2021, a 1.2% increase compared with the same fiscal quarter a year ago, Georgia Ports Authority (GPA) officials announced last week.

The port also set a monthly record in September, with TEUs increasing by 11.2% for a total of 412,148 TEUs, GPA Executive Director Griff Lynch said during his State of the Port Address and in a press release.

GPA officials also provided an update on infrastructure improvement projects underway at the port:
• Deepening of the Savannah Harbor to 47 feet at low tide is now 75% finished, with completion expected in late 2021.
• Nine new working tracks have been commissioned, with another nine slated for completion in 2021, at the Mason Mega Rail Terminal. The expansion will double the port's annual rail capacity to 2 million TEUs. When completed, the project will deliver the largest intermodal rail facility for a port authority in North America.
• An expansion of container handling capabilities at Ocean Terminal is slated to be completed by the end of 2020.

Lynch noted there's enough land permitted for private development to accommodate another 130 million square feet of distribution center space within 30 miles of the port. He also announced a 1.2 million square-foot facility in Bryan County will be build by medical goods provider Medline Industries. Construction is expected to be completed in late 2021, with FedEx leasing 415,000 square feet to provide e-commerce capabilities, Lynch said.