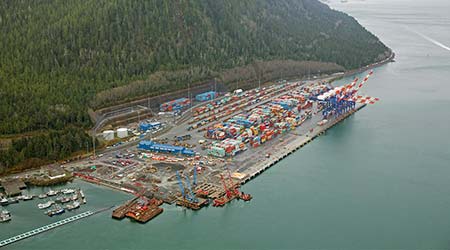 The Port of Prince Rupert and DP World officials announced this week that the Fairview Container Terminal expansion project is now 75 percent completed, a milestone in their effort to increase the port's capacity.

"Prince Rupert's container business has experienced rapid growth since the opening of Fairview Container Terminal. This project is the continued evolution of our fast and reliable trans-Pacific service," said Don Krusel, the port's president and chief executive officer.

The Fairview Container Terminal is served by CN. The expansion will include a second deep-water berth, three additional gantry cranes and land reclamation to further expand the container yard. On-dock rail capacity will be expanded by densifying the current track configuration, which will be supported by a rubber-tired gantry crane operation.

The project's next milestone is expected in March 2017 with the arrival of three Malacca-max dock gantry cranes to make the Prince Rupert port "big ship ready." Each crane is equipped with a reach of 25 containers wide and is capable of working the largest vessels in the world with a carrying capacity of 20,000-plus TEUs, port officials said.