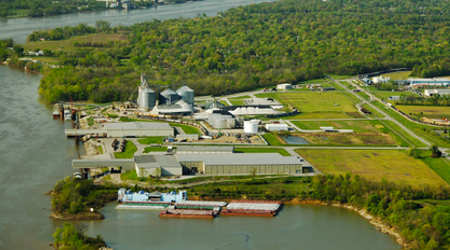 "The continued strength of the automotive sector along with steady improvement in building construction fueled our solid results in 2016," said Port Director Scott Stewart.

In addition, the first installment of infrastructure construction in and around the port was completed last year, Stewart added.

"The December opening of the Lewis & Clark Bridge links southern Indiana to Louisville and beyond and greatly enhances the port's connectivity to the region's manufacturing sector, including Ford's Kentucky truck plant in Louisville which is now only 15 minutes away," he said.

Steel shipments last year — second highest in port history — were boosted in part by U.S. auto industry demand. The port has a total of 14 companies that process or handle steel, aluminum, lubricants or plastics that support the top six automakers in the United States, port officials said.

Also last year, POSCO, a multinational steel producer based in South Korea, announced plans to locate a wire rod processing center at the port. The center is expected to begin operations by August.