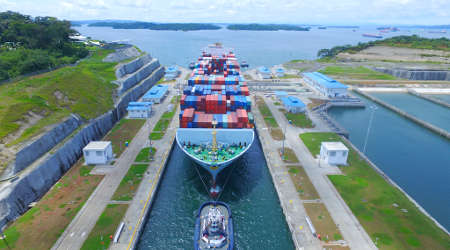 The Panama Canal last week welcomed the COSCO Yantian, the 2000th "Neopanamax" vessel to pass through the expanded waterway.

The ship, which can carry up to 9,504 20-foot equivalent units (TEU), moved through the canal on its journey from Asia to the Caribbean.

After an expansion project that wrapped up in June 2016, the Panama Canal can handle vessels with a maximum capacity of 14,000 TEUs. Prior to the expansion, the canal could only handle ships with a capacity of 5,000 TEUs.

The Yantian's passage "serves as yet another reminder of the industry's rapid adoption of the route and reinforces our commitment to continually improving the service we offer our customers," Quijano added.

Fifty-four percent of the ships that pass through the expanded canal are container vessels. Liquefied petroleum gas carriers and liquefied natural gas ships make up 29.2 percent and 8.6 percent, respectively.