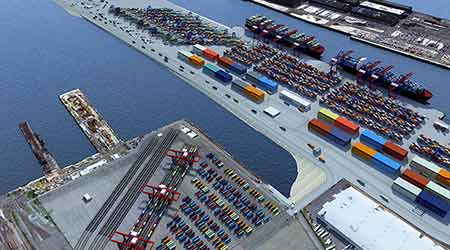 Designed to complement the terminal's big ship handling capabilities and quick transaction time, the intermodal yard will have an annual capacity of 250,000 container lifts, or 430,000 20-foot equivalent units (TEUs), according to a PANYNJ press release.

"As the port business continues to grow with the arrival of new, lower emissions, larger ships, it's critical that we invest in projects to deal with the increase in cargo in a sustainable way, maintaining our quality of life," said Port Authority Executive Director Pat Foye. "This project will not only expedite the movement of cargo through the region, but will take hundreds of thousands of truck trips off the road annually, providing a significant environmental benefit to the region."

Environmental benefits will mean:
• Every container lifted to a rail car displaces the need for 1.5 truck trips.
• Emission reductions resulting from the switch from truck to rail transport, over the life of the intermodal facility, are expected to total 415 tons of nitrogen oxide and 108 tons of particulate matter.
• 375,000 trucks will be eliminated from congested highways annually, which will reduce carbon dioxide emissions by 18,300 tons each year.