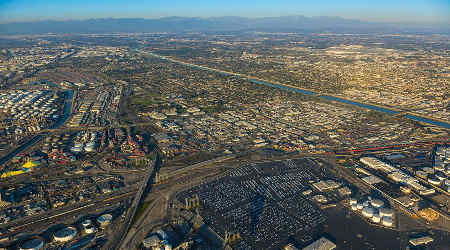 The Long Beach Board of Harbor Commissioners on Monday approved the construction of Pier B on-dock rail support facility at the Port of Long Beach, California.

The facility would provide track space to join together sections of trains assembled at terminals. The ability to build long trains now is limited due to lack of adequate yard tracks and the configuration of mainline tracks, port officials said in a press release.

In 2017, 24 percent of shipments at the port were moved via on-dock rail. The port aims to increase that figure to 35 percent, said Port of Long Beach Executive Director Mario Cordero.

No trucks would visit the new facility, which would be operated by Pacific Harbor Line. A 1-mile train can take as many as 750 trucks off the roadways, port officials said.

"This project is vital to our ability to stay competitive and will minimize truck trips generated by anticipated cargo growth," said Harbor Commission President Lou Anne Bynum. "Moving more cargo by rail to and from the Port reduces air pollution and makes operations more efficient."

Earlier this month, the Port of Long Beach released a final environmental impact report for the on-dock rail project.