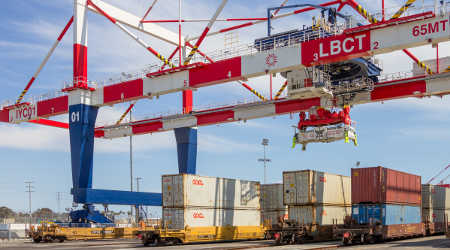 When Sean Gamette began working as a contractor for the Port of Long Beach in the late ‘90s, the ships calling on the Southern California port were much smaller than today’s super-sized ocean liners.

Back then, the port handled ships with a carrying capacity of around 6,000 20-foot equivalent units (TEUs). Today, it regularly welcomes ships that transport anywhere from 10,000 to 14,000 TEUs, says Gamette, who now serves as the port’s managing director of engineering services.

“The ship size increase has been very dramatic over what we consider a short period of time,” he says.

Going forward, ships coming to Long Beach are only going to get larger, port officials believe. Ditto for the sheer volume of containers entering the port, as evidenced by recent TEU statistics. Through July, the port handled 4,641,388 TEUs, up 11.3 percent over the same 2017 period.

To handle the mounting maritime traffic, the port in 2011 embarked on a nearly $1.5 billion project to combine two of its oldest terminals. Known as the Middle Harbor Redevelopment Project, it calls for significantly renovating piers E and F, and expanding the on-dock rail yard from 10,000 linear feet to more than 70,000 linear feet. 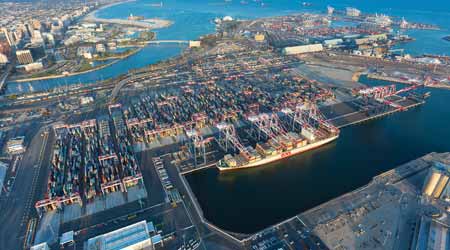 The Middle Harbor redevelopment project will increase the amount of cargo handled by rail.
Port of Long Beach

When the project is completed in 2020, the new combined terminal will be able to handle 3.3 million TEUs, twice the capacity of the existing terminals. Of that total, the terminal’s rail yard is expected to process more than 1 million TEUs.

“As trade increases through the port, so does the share of cargo that needs to go by on-dock rail,” Gamette says.

With a heavy focus on shifting truck shipments to rail movements, the project is aimed at establishing the world’s “greenest container shipping terminal” with all electric equipment, port officials say. The terminal will include a new electrical substation that will allow ships to plug into electricity and shut down auxiliary diesel engines while docked.

Currently, rail accounts for about 25 percent of cargo moving into and out of the port, but the terminal redevelopment program is expected to boost that to 35 percent. Eventually, railroads could move as much as half of the port’s cargo, Gamette says.

The majority of the funding for the work comes from the port’s own revenue, Gamette says, although some bonds have been issued. The port also received a $15 million trade corridor improvement fund grant from the state of California.

Port leaders have divided the Middle Harbor redevelopment project into three phases. Completed in early 2016, the first involved renovating the existing Pier E terminal, home to the Long Beach Container Terminal (LBCT). The next phase — capped off in October 2017 — expanded the terminal’s footprint to about 197 acres.

The final phase calls for demolition of the former container terminal at Pier F. Long Beach Container Terminal Inc. will operate the entire 311-acre combined terminal when it’s finished in 2020.

Last month, the port announced that it entered the third and final phase, which also includes completion of the on-dock rail yard. As part of the work, crews will lay an additional 54,000 linear feet of track to complete the terminal’s 73,000-foot network of on-dock rail.

For the port’s leaders, rail is pivotal to maintaining a competitive edge both now and in the future, as Deputy Executive Director of Administration and Operations Noel Hacegaba told Progressive Railroading in summer 2017.

Since rail is a key component of the Middle Harbor redevelopment project and the port’s overall business strategy, port leaders have been working to integrate railroad partners’ feedback throughout the process.

“All three of the railroads are involved in the review of our plans before we get into construction,” Gamette says. “We talk about how the rail yards need to be operated. We work in partnership with the railroads to ensure that what we’re building will lead to that.”

At varying levels of project completion — for example, when design is 30 percent finished — the port requires input and review from its stakeholders, including the railroads.

For BNSF, the project could provide a big intermodal traffic boost in a few years. The Class I handles the vast majority of freight at the LBCT, said Brandon Unterbrink, BNSF’s assistant vice president of international marketing, in an email.

“The projects at the [terminal] will ensure that the supply chain will continue to be more dynamic over time,” he said. “We expect the rail portion of the facility to increase, improving BNSF’s ability to efficiently move freight from the terminal to its final destination.”

And BNSF has been busy prepping its own network for continued traffic growth. This year, as part of its $3.4 billion capex plan, the railroad is budgeting $500 million for “expansion and efficiency” projects, Unterbrink said.

“The majority of those projects are focused on key growth areas along BNSF’s Southern and Northern Transcon routes,” he added.

While port officials remain optimistic about the project’s benefits, they’ve faced a number of challenges along the way, including the unexpected appearance of several “undocumented structures” at the more than century-old port.

During investigations of the area, crews ran into old oil wells and pipelines. The port also needed to clean up soil in the area, Gamette says.

“With an area that’s been redeveloped so many times, we have encountered undocumented structures that needed to be removed or cleared,” he says.

In addition, the perpetual flow of maritime traffic necessitated careful planning. For instance, the project was phased so the container terminals could remain open during construction. Plus, the port needed to schedule time for its terminal operator to commission and test the new technology and equipment before bringing it all online.

“Affording [the operator] the opportunity to move in and commission phase one and work out any challenges they had with the operating system was very important,” Gamette says, noting that some of the new equipment had never been used at a port before.

On the community relations side, things have been progressing smoothly over the course of the project. Community outreach has been ongoing, and many local residents have been on board with the project, according to the port, which employs about 30,000 people in Long Beach.

“These are people that work here in the port, to a large extent, and so they’re getting to be a part of a redevelopment project that will provide more jobs now and in the future … so we haven’t had pushback,” he adds.

Meanwhile, port leaders are banking on a host of new technologies to get the biggest bang for their redevelopment buck. Between the wharves and rail yard, the port has begun using new battery-powered vehicles operated by a software system. The vehicles, which sort cargo before it’s moved onto a train or truck, are expected to reduce air emissions. 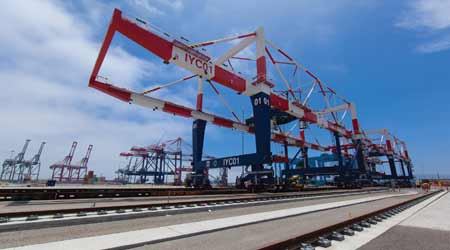 “The gauge on those cranes is 167 feet, and so they span the rail yard themselves,” Gamette says. “They can move cargo from the container yard onto and off the rail cars.”

In addition, the terminal features new dual-hoist cranes that can lift two containers at a time.

How all that new equipment will fare in the completed terminal remains to be seen, but port officials remain high on the project’s potential.

“In a nutshell, Middle Harbor is a key part of the port’s efforts to modernize and strengthen our competitive position in the market,” Gamette says. “Upgrading those two terminals into something new is necessary to accommodate today’s ships that are calling the port.”