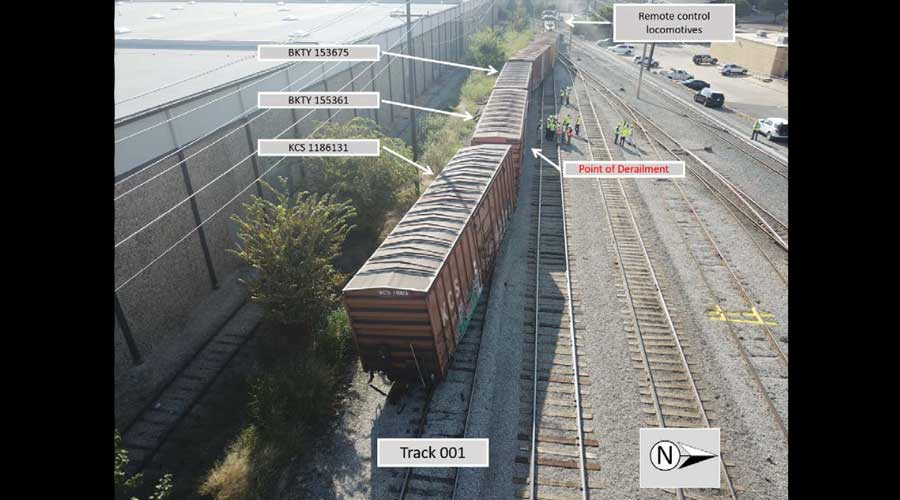 A loose, improperly fastened rail joint was the probable cause of a 2017 rail-car derailment that resulted in the death of a railroad employee, the National Transportation Safety Board (NTSB) determined earlier this month.

The accident occurred Sept. 22, 2017, when a Union Pacific Railroad train derailed during a coupling operation in UP's Great Southwestern Yard in Arlington, Texas.

At the time, a helper controlled the train remotely from the rear car. A foreman on the lead locomotive maintained radio communication with the helper. As the train traveled in reverse through a switch at a speed of 8 mph to couple with eight cars, the train's emergency brakes activated and a "man down" broadcast message went out over the railroad radio.

The foreman attempted to radio the helper. After receiving no response, the foreman went to the rear of the train and saw that a car had derailed and that the helper was between the third and fourth cars of the train. The helper died of injuries sustained during the accident, NTSB officials said in their report.

The NTSB determined the single-car derailment was caused by a loose and improperly fastened rail joint, which allowed the car's wheel to climb the mismatched rail. Contributing to the accident was the designation of the accident track as excepted track under the current Federal Railroad Administration Track Safety Standards, which allowed inadequate track conditions to exist on track used regularly, the NTSB report states.