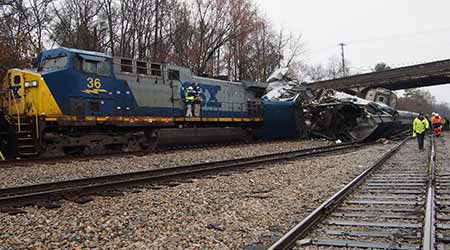 Published last week in the Federal Register, the voluntary safety advisory recommends that railroads develop and implement procedures and practices consistent with identified "best practices,” and take other actions to ensure the safety of railroad operations during temporary signal suspensions.

The FRA specifically noted the Feb. 4 accident in Cayce, South Carolina, in which the engineer and conductor of an Amtrak train were killed and 115 passengers were injured when their trains collided head-on with a CSX train.

Although the probably cause of that accident has yet to be announced, the FRA's preliminary investigation indicated that despite the CSX crew reporting to the train dispatcher that a switch was lined correctly, the crew did not restore the main track switch to its normal position as required by federal regulation and CSX's own operating rules, the draft advisory states.

"The misaligned switch diverted the next train to traverse the location (the Amtrak train) into the siding and into the standing CSX train parked on the siding," according to the advisory.

The FRA's advisory further noted that a March 14 accident near Granger, Wyoming,
occurred when a UP train traveled from a main track through a misaligned switch into a controlled siding and collided head-on with another UP train located on the siding.

"Notably, both the Cayce and Granger accidents occurred while the operating railroads were installing and testing positive train control technology and while the railroads had temporarily suspended the signals in the accident areas to perform installation and testing activities," the advisory stated.

The final safety advisory was issued after the FRA received comments from representatives at Amtrak, freight railroads, rail labor organizations and the National Transportation Safety Board.