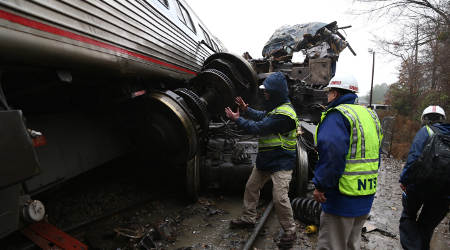 The Federal Railroad Administration (FRA) received one urgent recommendation based on the NTSB's findings in the board's investigation of the Feb. 4 collision between an Amtrak train and a CSX train near Cayce, South Carolina. The Amtrak conductor and engineer died as a result of the collision.

Additionally, the NTSB issued two urgent recommendations to the Metropolitan Transportation Authority (MTA) based on the board's findings from its investigation into the June 10, 2017, MTA Long Island Rail Road (LIRR) accident in which a roadway worker died near Queens Village, New York.

In the Amtrak-CSX accident, investigators learned that on the day before the crash, CSX personnel suspended the traffic control signal system to install updated traffic control system components for the implementation of positive train control.

The lack of signals required dispatchers to use track warrants to move trains through the work territory. In this accident — and a similar accident on March 14, 2016 in Granger, Wyoming — safe movement of the trains, through the signal suspension, depended upon proper switch alignment. That switch alignment relied on error-free manual work, which was not safeguarded by either technology or supervision, creating a single point of failure.

As a result, the NTSB concludes that additional measures are needed to ensure safe operations during signal suspension. The board asked the FRA for an emergency order directing restricted speed for trains or locomotives passing through signal suspensions when a switch has been reported relined for a main track.

"The installation of the life-saving positive train control technology on the CSX tracks is not the cause of the Cayce, South Carolina train collision," said NTSB Chairman Robert Sumwalt in a press release. "While the collision remains under investigation, we know that signal suspensions are an unusual operating condition, used for signal maintenance, repair and installation, that have the potential to increase the risk of train collisions. That risk was not mitigated in the Cayce collision. Our recommendation, if implemented, works to mitigate that increased risk."

In the LIRR accident, the NTSB identified an improper practice by LIRR roadway workers who were working on or near the tracks. LIRR employees were using "train approach warning" as their method of on-track safety, but they did not clear the track, as required, when trains approached and their "predetermined place of safety" did not comply with LIRR rules and procedures, according to NTSB officials.

The board is concerned that LIRR management is overlooking and therefore normalizing noncompliance with safety rules and regulations for proper clearing of tracks while using "train approach warning" for worker protection, they said.

As a result, the board's two urgent recommendations call on MTA to audit LIRR's use of "train approach warning" for worker protection, and to implement corrective action for deficiencies found through the audit.