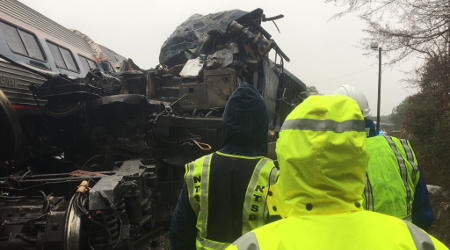 Two Amtrak employees were killed early yesterday when an Amtrak train collided with a CSX train parked on a siding near Cayce, South Carolina.

The Amtrak train, which was carrying more than 130 passengers, was traveling on track owned and controlled by CSX, National Transportation Safety Board (NTSB) Chairman Robert Sumwalt said at a press conference yesterday.

The Amtrak train was supposed to continue south on the main track, but a switch diverted it to the siding.

Before the incident, the CSX train had dropped off automobiles at a nearby unloading facility. That train then returned to the main track and backed into the siding, Sumwalt said.

CSX controls the dispatching of all trains — including directing the signal systems which control the access to sidings and yards — in the Columbia subdivision where the accident occurred, Amtrak officials said in an update after the incident.

The Amtrak train had seven passenger cars and one locomotive, while the CSX train had two locomotives and 34 empty autorack cars.

Throughout the several next days, NTSB investigators will "thoroughly document" the accident site, Sumwalt said. The board also will interview crews on the train, as well as dispatchers.

The collision came on the heels of two other fatal accidents involving Amtrak trains. In mid-December, an Amtrak train derailed from a bridge near DuPont, Washington, leaving three passengers dead. And last week, an Amtrak train struck a garbage truck at a grade crossing and killed one person.