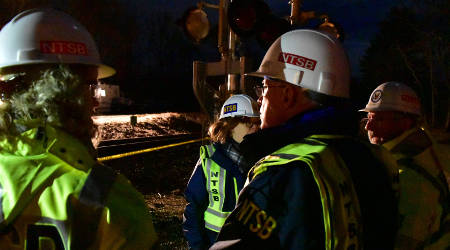 The National Transportation Safety Board (NTSB) has launched an investigation into what caused an Amtrak train to hit a garbage truck yesterday afternoon at a grade crossing in Crozet, Virginia.

The train was carrying Republican members of Congress on their way to a legislative retreat in West Virginia. One man — one of three in the truck — was killed and six other people were injured, according to local media reports.

None of the lawmakers, their family members or staff on board the train were among those seriously injured, according to The Washington Post.

NTSB investigators will be on the scene for several days, board member Earl Weener told reporters yesterday.

Some of the train's passengers assisted the injured after the incident, he said.

In response to reporters' questions about various "conspiracy theories" circulating over the cause of the crash, Weener said the NTSB is investigating the event as an accident.

"The NTSB does safety investigations. The fact that we are here is a presumption that this was an accident," said Weener.

If investigators discover information that indicates the crash was intentional, "we will turn that information over to the FBI," he said.