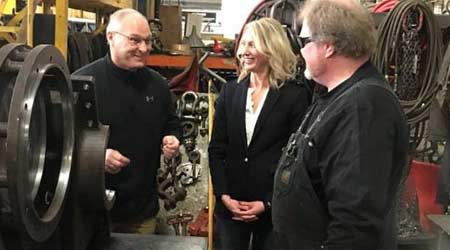 Stauber participated discussed with company officials and other visitors the importance of international trade with Canada and the need for Congress to ratify the U.S.-Mexico-Canada Agreement (USMCA), according to a press release issued by the National Railroad Construction and Maintenance Association (NRC).

If passed, the USMCA would succeed the North American Free Trade Agreement (NAFTA). In the conversation, NRC officials highlighted the concern of no Section 232 tariff protections and that the United States should not impose steel and aluminum tariffs on Canada.

IPS Cranes officials also discussed with Stauber the importance of the Build American, as well as the Building Rail Access for Customers and the Economy (BRACE) Act, which is now pending in Congress. The BRACE legislation would help the nation's small and local freight railroads to upgrade more of their own infrastructure and expand the "first-and-last mile" of transportation infrastructure.

IPS Cranes manufactures and remanufactures custom cranes for the rail, petroleum and mining industries. The Duluth facility is a repair, rebuild and manufacturing site for all types of track equipment. The company employs 50 people across its locations, including 20 in Duluth.