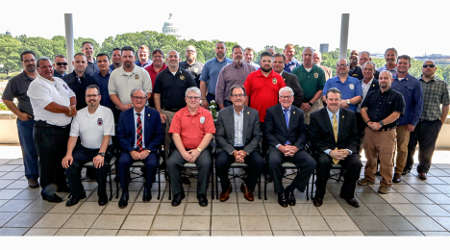 The Brotherhood of Locomotive Engineers and Trainmen's (BLET) legislative representatives visited 150 congressional offices in Washington, D.C., earlier this month to raise awareness of the union's dispute with the Texas Mexican Railway (Tex Mex) and its parent, Kansas City Southern Railway.

On July 9, Tex Mex replaced U.S. crew members with Mexican train crews between Laredo Yard in Laredo, Texas, and the International Bridge located about 10 miles away.

Twenty-seven BLET legislative representatives and state legislative board chairmen participated in the congressional office visits. They presented copies of a letter the BLET recently sent to President Trump, asking him to intervene in the dispute.

Besides the Tex Mex case, the BLET representatives talked to lawmakers about the union's support for S.B. 2360 and H.R. 233, which would mandate a minimum crew size of two for the operation of freight trains in the United States.