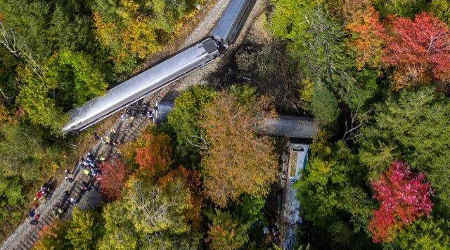 The probable cause of an Amtrak train derailment in Vermont in October 2015 was the train's collision with debris that had fallen on the track after a rock slide, the National Transportation Safety Board (NTSB) announced last week.

The incident occurred the morning of Oct. 5, 2015, when Amtrak Train 55 hit a rock pile that fouled the track on the New England Central Railroad (NECR) Roxbury Subdivision near Northfield, Vt. The collision caused the locomotive and four coach cars to derail, injuring four crew members and three passengers, according to the NTSB's accident brief.

The locomotive and first coach car slid down a steep embankment after the collision. Amtrak estimated equipment damages at $10 million, and the NECR estimated track damages at $200,000.

The track was not equipped with slide-fence detectors that could have provided a warning to approaching trains, the brief stated. Amtrak restricts speed in the area at 59 mph, which was Train 55's speed a few seconds before the collision.

Although the NECR had a safety program at the time of the accident, the railroad did not have a formalized hazard management and assessment program that addressed rock-slide risk management and mitigation, the NTSB brief stated.