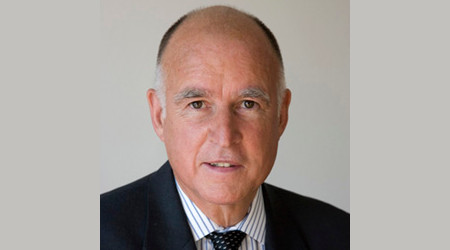 Brown wrote to the president last week to request for "delegation of federal authority" under the National Environmental Protection Act, according to a report in the Los Angeles Times.

California's $64-billion high-speed rail project involves construction of a bullet train line between Los Angeles and San Francisco, but the environmental review process is behind schedule. Earlier this year, the state's rail authority said it would not meet its goal to have all of its reviews done this year, the Times reported.

Brown made his request to Trump because he believes state regulators can move along the process faster than federal regulators. The project's environmental review has been divided into a series of regional segments with each requiring the designation of routes, station locations and other matters, the article stated.

Brown wants to shortcut the process so that the state's rail authority board can make the final decision on reviews and changes to the environmental documents.

Meanwhile, Dr. Joaquin Arambula, a member of California's Assembly, has been named an ex-officio member to the California High-Speed Rail Authority's (CHSRA) board. A physician, Arambula was elected to the state Assembly in April 2016 to represent California's 31st Assembly District.

"Dr. Arambula has been a long-time advocate of California's high-speed rail program, and has sought to ensure the residents of the Central Valley see the benefits of the ongoing construction of high-speed rail," said CHSRA Chairman Dan Richard in a press release.