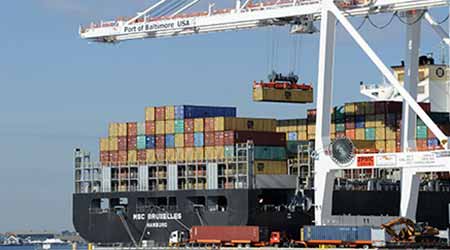 Maryland state transportation officials have reapplied for a U.S. Department of Transportation (USDOT) FASTLANE grant for a proposed project in Baltimore to raise the height of the Howard Street tunnel and nine bridges so that double-stacked trains can travel on a CSX corridor.

The proposed project would help eliminate a rail bottleneck from the Helen Delich Bentley Port of Baltimore to the East Coast, according to a press release issued by Maryland Gov. Larry Hogan.

In October, Hogan committed to working with CSX Chairman and Chief Executive Officer Michael Ward to advance the project to raise the 121-year-old tunnel's height after the USDOT had rejected a joint CSX/state of Maryland FASTLANE grant application for the work earlier this year. Double-stack trains would provide a more cost-effective way to transport freight by rail than by truck, and would reduce congestion along the entire Interstate-95 corridor, Hogan administration officials said.

“Reconstructing the Howard Street tunnel will create thousands of jobs, open up new trade lanes for the port, and improve overall freight rail service across our nation," said Hogan.

The project is estimated to cost $445 million. CSX and the state have committed a combined minimum of $290 million. The state is seeking the federal grant to cover the remaining funds.

The FASTLANE program provides dedicated, discretionary funding for projects that address critical freight issues facing the nation’s highways and bridges. The acronym stands for Fostering Advancements in Shipping and Transportation for the Long-term Achievement of National Efficiencies.