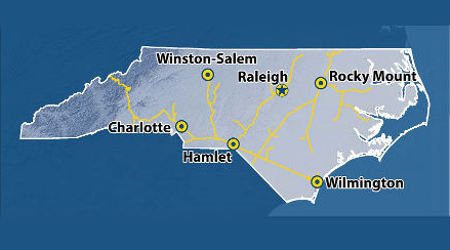 The North Carolina Department of Transportation (NCDOT) has selected Dewberry to develop a transportation and freight master plan for the new Carolina Connector intermodal rail terminal in Rocky Mount.

CSX announced in July 2016 that it would build the terminal, which will serve as a major intermodal transportation center for the Class I. Construction is slated to begin in 2018; operations are expected to begin in 2020, according to CSX.

Dewberry will focus on the transportation connections to potential freight nodes across the state and the strategic infrastructure investments that will be crucial to the terminal's success, Dewberry officials said in a press release.

The firm also will identify key markets for targeted future investment to help spur economic growth for the state.

"The new intermodal hub and its surrounding development will generate tremendous economic opportunities for North Carolina residents," said Rachel Vandenberg, Dewberry vice president and project manager. "Our engineers and planners are excited to be part of such an impactful undertaking."