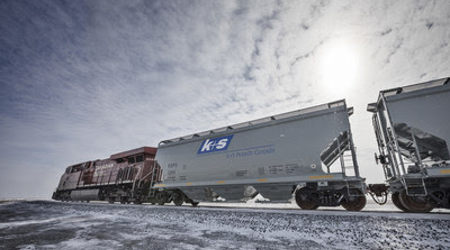 Canadian Pacific and K+S Potash Canada (KSPC) yesterday marked the opening of the Legacy Project mine site, the first of its kind built in Saskatchewan in more than 40 years.

CP will use unit trains to ship the potash products to KSPC's handing and storage facility in Port Moody, British Columbia, then on to the overseas market, CP officials said in a press release.

The mine and related rail infrastructure built is the most significant project undertaken by CP since the mid-1980s. Construction of the 18.6-mile route to the mine site was a geotechnical challenge, CP officials said.

"Building 30 kilometers of new rail through a rural area, including a river valley, is no easy feat and I want to congratulate all those who invested their time and energy in bringing this project to a successful conclusion," said CP President and Chief Executive Officer Keith Creel.

The mine is expected to have marketable product by the end of the second quarter and will reach a production capacity of 2.2 million tons by 2017's end.