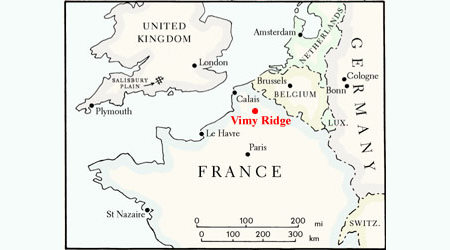 Canadian Pacific last week commemorated the 100th anniversary of the Battle of Vimy Ridge, in which Canadian troops won a key military victory in northern France during World War I.

The battle, which took place April 9-12 in 1917, is considered a defining moment in Canada's history. It also came at a heavy cost, as more than 3,598 Canadians were killed and another 7,000 wounded, according to the Canadian War Museum.

CP put its freight and travel system at the disposal of the British Empire and allies at the outset of the war. The company contributed not only tracks and trains, but its ships, yards, shops, hotels, telegraph lines and people. About 11,340 CP employees enlisted in the war, with 1,116 railroaders losing their lives and another 20 percent wounded before the war's end, according to a CP press release.

At last week's commemoration, CP President and Chief Executive Officer Keith Creel honored the Canadians and CP railroaders who served the country then and now.

"Many Canadians paid a terrible price for this historic victory at Vimy, and I am humbled and honored to be part of a company that has contributed so much to protecting the people and values we all hold so dear," Creel said.

During the war, two CP employees received the Victoria Cross for gallantry in the face of the enemy, and 385 others were decorated for valor and distinguished service.

As part of the effort, CP also organized the first battalion of Canadian Overseas Railway Construction Corps to build and run railways through Europe during the war.