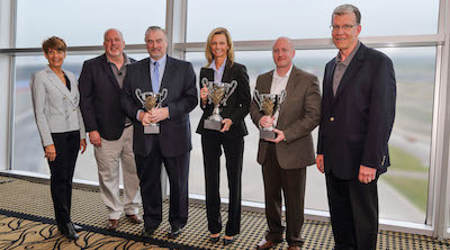 BNSF Railway Co. recently was named the 2016 recipient of the President's Award for Logistics Excellence by Toyota Logistics Services. The Class I now has attained the honor for three consecutive years.

"With regards to on-time performance, BNSF continuously partnered with us to identify opportunities to improve transit times and their overall network efficiency to support our business," said Bill Barrett, Toyota Logistics Services' senior rail/truck strategy and operations manager. "When it comes to quality BNSF epitomized what it means to strategically think continuous improvement."

"We are as focused as ever on ensuring our customers' vehicles reach their destination on-time and in factory-fresh condition, and the President's Award is evidence of our employees' continued efforts to provide exceptional service to our automotive customers," said Dave Fleenor, BNSF's assistant vice president of automotive marketing.