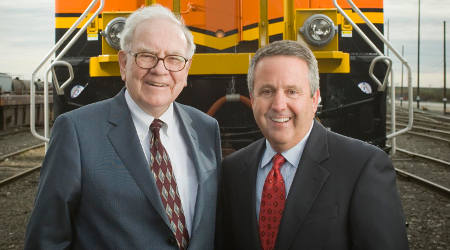 Matthew Rose will step down as executive chairman and retire from BNSF Railway Co. in April 2019, the company announced today.

When he retires, Rose will have been executive chairman for six years and BNSF chief executive officer for the prior 13 years. He also served in senior leadership for marketing and operations before assuming the CEO role in 2000.

During his tenure as CEO, Rose helped guide the acquisition of BNSF by Berkshire Hathaway Inc. (BRK) in 2009.

As part of employment development, Rose oversaw the design of the BNSF leadership model in 2000.

His commitment to safety and productivity is demonstrated through his focus on technology, which led to BNSF's leadership in train control implementation, company officials said.

"I have been incredibly fortunate to work alongside some of the most talented people in the transportation industry," said Rose. "Through my 26 years at BNSF­ — 19 in leadership — I have seen enormous change in our economy. Our company has navigated those changes well and now is extremely well positioned for the next several decades. It has been an honor to lead this organization, as a publicly traded company and also as part of BRK."

In 2010, Progressive Railroading recognized Rose with the magazine's Railroad Innovator Award. Editor Pat Foran's profile of Rose at that time can be read here.