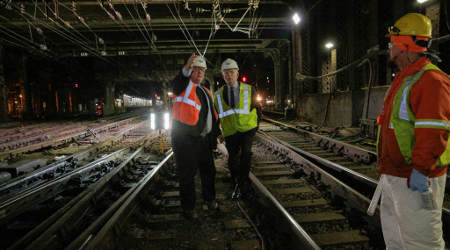 Amtrak is developing repair plans for Penn Station in New York City that could lead to closing some tracks for an extended period.

Railroad officials are preparing plans to "renew the infrastructure" at the station that will result in some delays and cancellations, Amtrak spokeswoman Christina Leeds said yesterday in a prepared statement.

"This renewal effort will replace and rejuvenate the selected infrastructure providing needed updates, and is different than the ongoing repair work in New York Penn," she said. "We'll have more on the plans in the coming days and will be working with Long Island Rail Road and New Jersey Transit to schedule this work and minimize service impacts."

The news follows Amtrak's acknowledgment earlier this month that track disrepair played a role in two recent train derailments at the station. The derailments — one involving a NJ Transit train and the other an Amtrak Acela train — caused severe service disruptions at the station.