The National Transportation Safety Board (NTSB) yesterday determined the May 2015 Amtrak train derailment in Philadelphia was caused by the train engineer's loss of "situational awareness" after his attention was distracted by radio communications of an emergency involving another train. 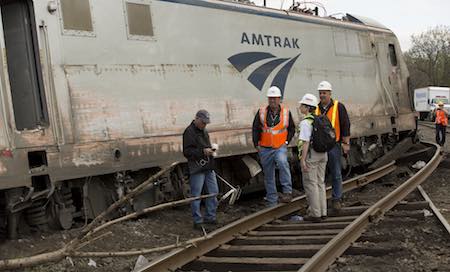 NTSB officials examine damage after Amtrak's May 12 derailment.
Photo: NTSB's Flickr account
On May 12, 2015, Amtrak Train No. 188 was traveling at 106 mph around a curve in Philadelphia, more than twice the area's 50 mph speed limit, when it derailed. Eight passengers were killed and more than 180 others were sent to local hospitals, according to the NTSB.

The board determined that the Amtrak engineer was not impaired by any substance and was not using his cell phone. Investigators found no evidence that the engineer was fatigued or suffering from a pre-existing medical condition while operating the train. The board described the engineer as "very cooperative" when he was interviewed by NTSB investigators.

During those interviews, the engineer indicated he was concerned for the well-being of the engineer of a Southeastern Pennsylvania Transportation Authority (SEPTA) train after that train had been hit in the windshield by a rock in North Philadelphia. The windshield shattered, covering the SEPTA engineer with glass.

The radio communications that the Amtrak engineer listened to lasted about six minutes and preceded the Amtrak train derailment by less than a minute. The Amtrak engineer became distracted by the SEPTA emergency, and lost "situational awareness" as to where his train was in relation to the curve with the 50 mph speed limit. The train's acceleration to 106 mph before entering the curve where the derailment occurred was consistent with a belief that his train had already passed the curve and into a section of straight track where the speed limit was 110 mph, the NTSB determined.

At the time of the accident, positive train control (PTC) was not operating on the section of track where the accident occurred. Had PTC been activated, the derailment would not have happened, NTSB Chairman Christopher Hart said at yesterday's board hearing.

"It's widely understood that every person, no matter how conscientious and skilled, is fallible, which is why technology was developed to backstop human vulnerabilities," said Hart in a prepared statement. "Had positive train control been in place on that stretch of track, this entirely preventable tragedy would not have happened."

The purpose of determining the accident's cause is to improve safety and prevent accidents, not cast blame, she said, noting that PTC would have stopped the train from derailing even though the engineer's attention was momentarily distracted.

However, other board members disagreed that the lack of PTC should be identified the probable cause in this case. They noted that a train engineer is the primary person responsible for a train's operation, whether or not a PTC system is in place. Therefore, the probable cause in the Amtrak derailment was the engineer's loss of situational awareness, but the lack of a PTC system was a contributing factor, they said.

"Unless positive train control is implemented soon, I'm very concerned that we're going to be back in this room again, hearing investigators detail how technology that we have recommended for more than 45 years could have prevented yet another fatal rail accident," Hart said at the end of the hearing.

The NTSB investigation also revealed that some of the Amtrak train's windows failed to remain intact during the accident. If the windows had not failed, some passengers who were ejected from the train and killed likely would have remained inside the train and survived.

In addition to those 11 recommendations, the board had recommended five other safety measures during the derailment's investigation.

After yesterday's hearing, Amtrak officials said the railroad has taken full responsibility for the derailment.

"We will carefully review the NTSB findings and recommendations from [yesterday], and as appropriate, quickly implement," the statement reads. "We have already completed the installation of positive train control on most of Amtrak's portion of the Northeast Corridor, and have also recently completed the installation of inward-facing video cameras in the fleet of ACS-64 locomotives in service on the Northeast Corridor. The goal is for us to fully understand what happened and how we can prevent a similar tragedy from occurring in the future."