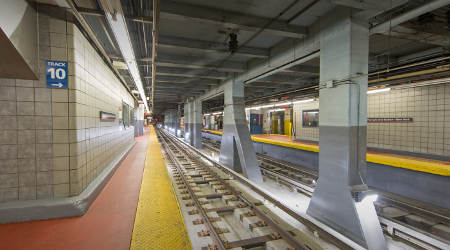 Amtrak has completed its summer infrastructure renewal project at Penn Station, which will allow for normal schedules to return to the New York City station on Sept. 5, the railroad announced yesterday.

"This accelerated work was an enormous undertaking. We did it on time, on budget, and most importantly, safely," said Amtrak co-CEO Wick Moorman in a press release. "This summer's work and support from our partners will result in greater reliability in the future."

The work focused on "A Interlocking," the critical sorting mechanism that routes outgoing trains that enter and exit Penn Station from the Hudson River Tunnel and MTA Long Island Rail Road's West Side Yard to the station's tracks and platforms. The work involved a total track and switch replacement that will improve train service through that area in the station.

About 360 Amtrak employees worked around the clock to install 897 ties, 1,100 feet of rail, 1,000 tons of ballast, seven turnouts, four complex diamond crossings and 176 yards of concrete.

"As we mark the conclusion of this intense two-month work period, we must remind everyone that much more work remains and that rebuilding our infrastructure is a continuous process," Moorman said. "We have more work planned throughout the fall, winter and into next year to improve other areas of track within New York Penn Station."

Most of that work will be handled during normal weekend maintenance projects, he said.

Moorman also called for continued investment from the federal government, Amtrak's railroad partners and the states "to help us make the necessary improvements to infrastructure at Penn Station and all along the entire Northeast Corridor."

The Penn Station renewal work was one part of Amtrak's plan to modernize stations, infrastructure and equipment on the corridor.