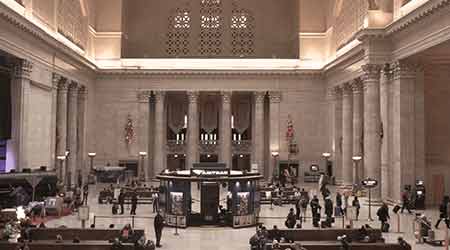 Funded by Amtrak, the project involved restoring the hall's skylight, improving lighting and repainting the interior in its original colors.

Berglund Construction and architect Goettsch Partners devised a solution to maintain the hall's usage by using a suspended working deck for most of the past 12 months. The hall's iconic skylight had been obscured by the deck until the last several days, Amtrak officials said in a press release.

The Great Hall's centerpiece is its 219-foot-long skylight that soars 115 feet above the floor. It had deteriorated due to flaws within the original design that led to water damage to the walls of iconic space and to the skylight itself, Amtrak officials said.

A new elevator from Canal Street is now active, the first time there has been ADA-compliant access to the Great Hall from the west side of the street.

"This work enhances our customer experience, with a much brighter and inviting Great Hall," said David Handera, Amtrak's vice president of stations, properties and accessibility.