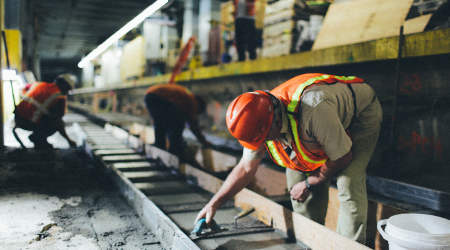 Amtrak in January will kick off the next phase of infrastructure renewal at Penn Station in New York City.

The projects include replacing tracks 15 and 18, as well as renewing and replacing three turnouts in the "C" interlocking, which directs Amtrak and MTA Long Island Rail Road trains heading east to Sunnyside Yard in Queens, New York.

The bulk of the renewal work for 2018 will take place on weekends, but several continuous single-track closures will occur in January and May. The closures will require minor modifications to Amtrak and commuter train weekday operations at the station, Amtrak officials said in a press release.

For New Jersey Transit, the work will affect five daily trains — two in the morning rush hour and three in the evening peak period.

The impact of the service changes will be "far less than what we experienced this past summer," NJ Transit Executive Director Steven Santoro said in a press release.