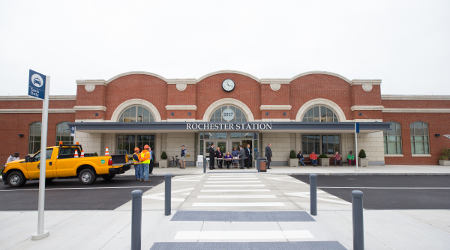 The station is designed to speed up travel with expanded track service, streamline operations with a modern concourse and baggage handling system.

The Rochester Intermodal Station also is compliant with the Americans with Disabilities Act, according to a press release issued by New York Gov. Andrew Cuomo's office.

The 9,500-square-foot station features two new dedicated passenger tracks. The former station had only one platform track, which was shared by freight and passenger trains. The two additional tracks allow freight trains to bypass the station without having to stop.

CSX helped prepare the site for construction by relocating live signal wires to make room for the new platform, concourse and additional tracks. The Class I removed signal poles that were no longer in use, clearing additional space for station construction.

Funding for the project included a $23.4 million grant from the New York State Department of Transportation, $20.4 million from the federal government and $500,000 from the city of Rochester.