'We Are ONE' commemorative locomotive debuts 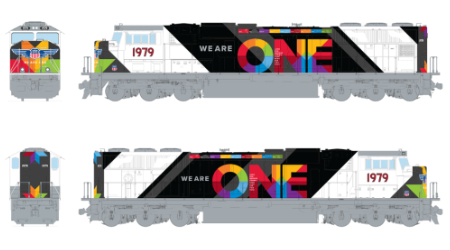 Union Pacific Railroad's "We Are ONE" Employee Resource Group (ERG) commemorative locomotive is ready to hit the tracks. UP No. 1979 is named after the year in which the Class I established its first ERG, the Black Employee Network (BEN).

The locomotive will travel through UP's system on its way to the ONE ERG conference to be held in Omaha Sept. 1-2. Its unveiling will be held in Houston in honor of Juneteenth day, the holiday marking the end of slavery in the United States.

Houston is less than an hour from Galveston, Texas, where Juneteenth originated. Texas was the first state to make Juneteenth as an official holiday.

The locomotive is scheduled to stop by the Malcom X Memorial Foundation in Omaha for the inaugural Juneteenth Omaha Freedom Festival, for which UP is the presenting sponsor.