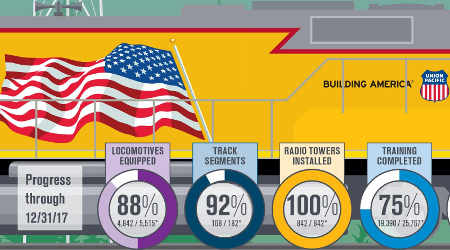 UP will meet all required deadlines for installing PTC on its network, and will continue to test and refine the system's "immature technologies" in 2019-2020, according to a company press release.

The Class I's PTC footprint covers 17,000 route miles, making it the largest of all American railroads, UP officials said.

Congress mandated railroads to install PTC systems as part of the Rail Safety Act of 2008. The original deadline for PTC implementation was the end of 2015, but Congress extended the deadline to Dec. 31, 2018, with further extensions allowed until Dec. 31, 2020, if approved by the Federal Railroad Administration (FRA).

In their statement issued yesterday, UP officials noted one of the complexities of implementing PTC is ensuring system interoperability among all U.S. rail lines and locomotives.

"Given the various readiness levels of North American freight and passenger railroads, it will be important that all railroads continue working together to ensure smooth and safe transitions as PTC is implemented," UP officials said.

UP's fourth-quarter 2017 PTC accomplishments included:
• preparing 33 additional track segments for PTC operations, bringing the total number of track segments to 168, or to 92 percent completion. The 33 track segments are equipped with wayside devices such as signals, switches and radios, and have defined GPS coordinates, which identify thousands of precise locations for systemwide PTC coordination.
• educating more than 2,700 additional employees on PTC operations, bringing the total number of employees trained to about 19,400, or 75 percent. Training materials are tailored to a variety of employee roles, including engineer, conductor, dispatcher, maintenance of way/engineering, mechanical, signal, telecom and information technologies.
• increasing by nearly 2,500 the number of route miles in PTC operation, bringing the total number of route miles in PTC operations to 10,053, or 59 percent completion.

UP plans to spend $180 million on PTC this year. Its total PTC implementation cost is $2.9 billion.

During first-quarter 2018, UP will focus its PTC work mainly in southeast Texas and New Mexico, company officials said.