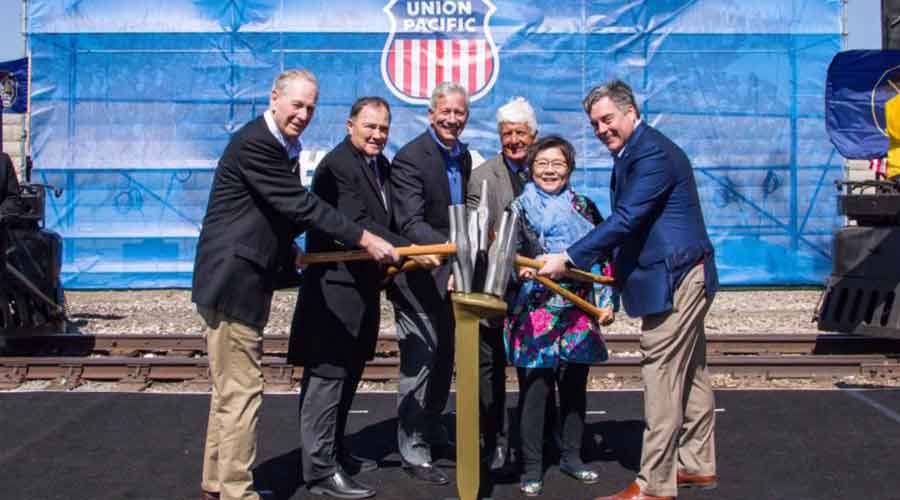 Union Pacific Railroad executives joined other public and private-sector officials in ceremonies last week marking the 150th anniversary of the driving of the Golden Spike in Promontory Summit, Utah, which signaled the completion of the transcontinental railroad.

On May 9, a ceremony held at Ogden Union Station in Ogden, Utah, featured UP's steam locomotives Living Legend No. 844 and Big Boy No. 4014. The two met, recreating the historic image taken at Promontory Summit on May 10, according to a UP press release.

The Big Boy is one of eight 4000-class steam locomotives still in existence.

Following the steam meet, UP Chairman, President and Chief Executive Officer Lance Fritz and Utah Gov. Gary Herbert were joined by Margaret Yee and Sandy Dodge to tap a ceremonial spike. Yee's ancestors were among thousands of Chinese immigrants who forged the transcontinental railroad for Central Pacific. Dodge is a descendant of Gen. Grenville Dodge, a Civil War veteran and UP's chief engineer during construction.

"This celebration is Union Pacific's way of reflecting on our ancestors' remarkable achievements that connected the nation while reminding us of the enormous responsibility we have for our nation's future," said Scott Moore, UP senior vice president-corporate relations and chief administrative officer.

Then on May 10 in Promontory, Utah, the state celebrated the 150th anniversary of the Golden Spike. The day's events included remarks from Fritz and U.S. Transportation Secretary Elaine Chao.