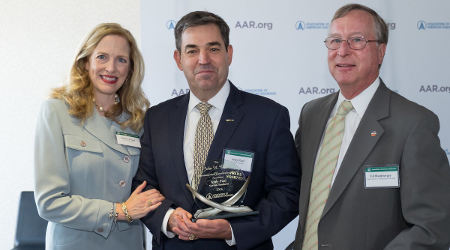 The AAR issues the award annually in honor of the late senator from Rhode Island. Chafee was a strong advocate for environmental causes and the eco-friendly benefits of rail transportation.

The award recognizes a railroad employee who has demonstrated the highest level of environmental stewardship in the previous year.

"Andrew Paul's work at Norfolk Southern has transformed how his railroad thinks about capital building projects to focus on energy solutions that are environmentally responsible," said AAR President and Chief Executive Officer Edward Hamberger in a press release.

After 30 years in the U.S. Navy, Paul took the lead of NS' energy services program as senior manager of energy and facility services. In five years, he outfitted more than 100 shops, yards and offices with longer-lasting, energy-efficient lighting and HVAC systems.

Those investments generated a savings of nearly $5 million in annual energy and maintenance costs, and reduced emissions by nearly 36,000 metric tons, which is the equivalent of removing 7,500 passenger vehicles from the road.

Paul also has helped local supervisors better understand how energy is used across NS through an energy audit program that identifies ways to save money and reduce environmental impacts. For his most ambitious project, Paul is leading the way on a three-year, $53 million energy conversion project at NS' largest locomotive shop. That project is expected to be completed later this year.

In addition to Paul, the AAR announced five other railroaders who were nominated for this year's award. They are Jesse Contreras, general foreman at BNSF Railway Co.; Milton Dempsey of Union Pacific Railroad; David Nechvatal, industrial engineer for CSX; Michael Singelyn of CN; and John Tull of Amtrak.