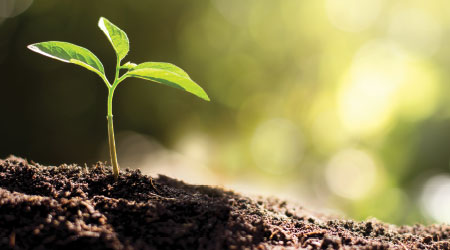 In early October, the United Nations’ Intergovernmental Panel on Climate Change (IPCC) released a report painting a dire picture of the future of life on planet Earth in the not-too-distant future.

Although countries around the globe had pledged to take steps to keep the global temperature rise below 2 degrees Celsius as part of the 2016 Paris Agreement, the IPCC report warned about the dangers of even a 1.5 degree increase.

The report called on governments and organizations to make “rapid, far-reaching and unprecedented changes in all aspects of society” to keep the global temperature from rising to unsustainable levels. Failure to do so over the next few years could have catastrophic effects on ecosystems around the world, including the risk of more floods, droughts and destruction of wildlife, according to the report.

“For example, multiple lines of evidence indicate that the majority of warmer water coral reefs that exist today will largely disappear when global warming exceeds 1.5 degrees Celsius,” IPCC officials noted in the report.

The report also called on companies in several industries — including transportation — to make some quick changes to reduce carbon dioxide emissions.

“Things become even more urgent when you’re talking about how to contain the 1.5 degrees,” says Werner, who also serves as vice president of corporate communications.

For a while now, Class Is have been continuing efforts to boost their own environmental sustainability practices and reduce greenhouse gas emissions. Over the past several years, railroads have begun issuing annual sustainability reports to highlight ways they’re working to do just that. And while sustainability initiatives are becoming necessary to protect the environment, they’re also part and parcel of a good business strategy, rail execs say.

“There is such a correlation between good sustainable practices and good-for-the-bottom-line practices that we’re not in conflict there,” Werner says. “Certainly you have capital constraints like any company does, and you have bandwidth constraints that you can only take on so many projects before you end up making yourself less efficient by chasing too many rabbits.” 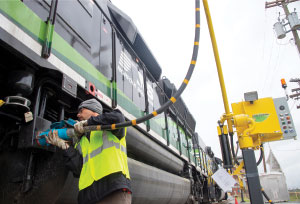 An NS employee connects a locomotive to the Sleeper plug-in heater system at the railroad’s Inman Yard in Atlanta. The system is aimed at reducing unnecessary idling, especially in freezing weather.
Norfolk Southern Corp.

But ultimately, the push toward sustainability is having a positive impact on business outcomes. Witness NS’ “Sleeper” system for locomotives parked in rail yards. The plug-in system charges batteries and heats engines, which enables the engineer to shut off locomotives in freezing weather.

That could help meet the Class I’s goal of improving locomotive fuel-efficiency by nearly 9 percent by 2020, a goal the railroad adopted as part of its strategic plan.

The railroad also explored hydrogen-powered fuel cell charging batteries for switcher locomotives, but the benefits didn’t “pencil out,” says John Lovenburg, BNSF vice president, environmental. Not that the technology couldn’t be implemented in the future, he adds.

BNSF has been deploying electric wide-span cranes at intermodal facilities in Seattle; Chicago; Memphis, Tennessee; and Kansas. Since they’re electric, the cranes produce no emissions on site.

There are some operational advantages, too. With conventional cranes, containers typically are stacked laterally, but the electric cranes enable stacking vertically, which means the containers and trailers are moved shorter distances.

BNSF plans to roll out the cranes at other intermodal sites, Lovenburg says. But it’s often simpler to implement the technology at newer terminals.

“It’s a little bit like trying to keep the restaurant open while doing remodeling of the kitchen,” Lovenburg says of efforts to install the electric cranes at existing facilities.

“Battery costs have been coming down, so we’re anticipating those costs will go down in the future,” he adds.

There are some challenges to implementing newer technologies, however. For example, there’s not much competition among manufacturers of battery electric trucks, keeping equipment costs high. And railroads foot the electrical infrastructure bill.

Class Is also must navigate an evolving regulatory landscape. BNSF needed to get regulatory clearance to test liquefied natural gas locomotives, for instance.

“You have to keep in mind the financial, regulatory and operational components for any of these technologies,” Lovenburg says.

“Accessing the data of what happened during a trip is so much easier than it was a decade ago,” NS’ Werner says. “Now we know where trains were, how they were being handled, what the weather conditions were. So, we can give much more pointed feedback. You make it much easier for an engineer to become more effective.”

Still, it can be a challenge to implement new technologies among veteran railroaders. To overcome that, NS brass educate railroaders on the perils of what Werner terms “conventional wisdom.”

“Sometimes the conventional wisdom can be misleading,” he says. “There are tools out there than can actually do those calculations better than you can do them in your head, even if you’ve got 40 years of experience as an engineer. We need to break through that.”

Aside from new and emerging technologies, railroads are exploring other ways to raise the bar on sustainability. For instance, BNSF often conducts restoration revegetation after construction projects. It’s one way the railroad “embeds green practices into our normal rhythm of business,” Lovenburg says.

It’s a similar story at NS, which has embarked on its “Trees and Trains” carbon-mitigation strategy. The railroad has spent $5.6 million to reforest 10,000 acres in the Mississippi Delta area — a venture expected to generate 1.12 million “carbon credits” for NS, according to the Class I’s sustainability report.

These credits can be used to offset carbon emissions or sell to others wishing to do the same, NS officials said in the report.

Emission reductions are a focus at CSX, too. Since 2011, the railroad has cut greenhouse gas emission intensity by about 5 percent, according to CSX’s 2017 corporate sustainability report.

The Class I also focuses on reducing emissions of other “ozone-depleting substances,” including nitrogen oxides and sulfur oxides.

“With a constant eye on controlling costs and utilizing our assets more effectively, we have been reducing our carbon footprint, minimizing impacts on the environment and helping customers create a greener, more efficient supply chain,” CSX President and CEO James Foote wrote in the report.

CSX may get an added sustainability boost by implementing precision scheduled railroading (PSR). For Canadian Pacific, implementing the efficiency- focused operational strategy has been “the most significant sustainability work undertaken,” said spokesman Andy Cummings in an email.

Likewise, at CN, “the single best way” to improve the environment is by improving locomotive operating efficiency, officials noted in the railroad’s 2016 sustainability report.

For instance, the largest source of greenhouse gas emissions at CP is locomotive fuel consumption, which also is one of its most substantial operating costs. As a result, reducing fuel consumption can impact both profitability and the environment.

“Far from conflicting, business incentives go hand-in-hand in cases like these,” Cummings said. “It’s also worth noting that sustainable development is integral to CP’s pursuit of long-term value creation and commitment to being a responsible operator.”

What’s more, each unit will be equipped with GE’s Trip Optimizer software, as well as its distributed power features — both of which are certified by the U.S. Environmental Protection Agency (EPA) as fuel and emissions reduction technologies.

In 2017, the Class I modernized 30 locomotives. This year, CP anticipates upgrading 80.

To hammer home the sustainability message among employees, CP shares information though its magazine and company intranet. Information also is available to workers through the railroad’s corporate sustainability report and investor factbook.

In addition, CP last year formed a sustainability steering committee with staff from various departments and levels of management.

Employee engagement is a crucial to CN’s sustainability practices, too. The railroad continuously trains crews and rail traffic controllers on best practices for fuel conservation, including locomotive shutdowns in yards, according to the railroad’s 2016 sustainability report. 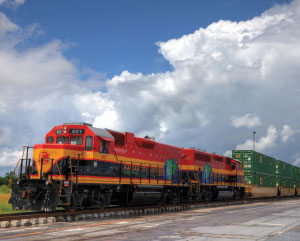 To be sure, accountability is a key part of any road’s sustainability initiatives. To maximize their environmental sustainability efforts, Kansas City Southern officials maintain compliance with Global Reporting Initiative (GRI) standards, spokeswoman Doniele Carlson noted in an email.

“KCS is implementing processes and procedures to track progress on many sustainability initiatives, which can be challenging given the complexity of a network spanning over 6,700 route miles across the U.S. and Mexico with varying levels of sustainability engagement and multiple methods of data measurement and reporting,” she said.

To address that challenge, KCS is using internal data to monitor energy use and evaluating various certifications and reporting methodologies to align with its own sustainability practices, Carlson added.

On the employee side, KCS highlights workers’ personal efforts to lead sustainable lives. The railroad also has installed electric car-charging stations at its corporate headquarters in Kansas City, Missouri. What’s more, KCS worked with more than 125 employees to compile its most recent sustainability report, Carlson said.

“KCS is fully engaged, committed and taking action toward greater sustainability for people and the planet,” she added.

“We’re proud of the fact that since 2000, we’ve saved nearly 2.9 billion gallons of fuel, and our work is ongoing,” UP officials wrote in the railroad’s 2017 sustainability report. “Union Pacific set a new goal to further reduce locomotive consumption by 1.5 percent through 2020.”

Like UP, CN is working to improve efficiency by purchasing new locomotives. In 2016, the Canadian Class I acquired 90 new high-horsepower locomotives. The railroad has also installed locomotive telemetry systems and Trip Optimizer to help further cut down on emissions, CN officials said.

But to chip away at greenhouse gas emissions and improve overall environmental sustainability, rail execs acknowledge there’s much more to do than roll out new equipment and technology.