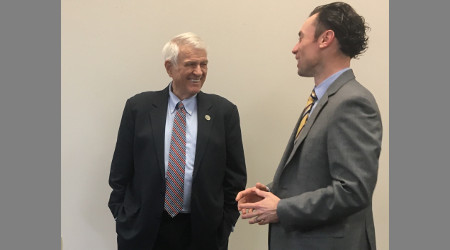 SENSR President Walter Bleser II led Carter through the company's operations and explained how the company contributes to maintaining U.S. rail infrastructure, according to a press release issued by the National Railroad Construction & Maintenance Association (NRC), of which SENSR is a member.

SENSR develops solutions for monitoring safety and stability of critical structures, such as rail and highway bridges.

"Both railroad and highway infrastructure are vital to our nation's economy, moving billions of travelers and billions of dollars of goods each year, so it's important that our nation's bridges are safe," said Bleser. "For nearly five years, SENSR has worked continuously to assist railroads and departments of transportation with monitoring technology necessary to ensure these bridges are as safe to cross as the day they opened to traffic."

As part of the tour, Bleser demonstrated how SENSRsi works and explained a recent incident in which the technology detected two barge strikes to a bridge across the Mississippi River.