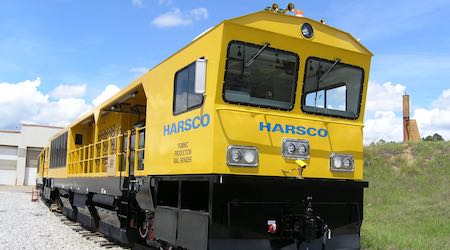 Harsco Rail has sold railway grinders to RailWorks Corp. for service in contract rail grinding programs throughout North America. RailWorks already has two Harsco rail grinders in service, along with a third unit that entered service last month, Harsco officials said in a press release. The sale of a potential fourth unit is anticipated within the first half of next year. When concluded, the sales are projected to have a combined value of about $20 million. The latest configurations include Harsco's Jupiter II Control System, a laser profile measurement system and other features such as on-board dust collection and fire suppression.

Road & Rail Services Inc. was awarded the 2016 Honda Performance Excellence Award for plant processor of the year. The award recognizes Road & Rail's "outstanding quality, process and service," according to a company press release. The honor also is a "vote of confidence" in Road & Rail's people, performance and longterm relationship with American Honda Motor Co.

Hollysys Automation Technologies Ltd. has signed two contracts to provide a ground-based high-speed rail signaling system and equipment to the Harbin-Jiamusi and Jiujingqu lines in China. The contracts total value is worth about $15.9 million. The company will install train control centers, line-side electronic units and other auxiliary equipment aimed at ensuring safety and reliability of the lines, Hollysys officials said in a press release.

Interpipe has produced the first order for passenger-rail wheels at its new facility in Dnipro, Ukraine. The order was for 240 wheels for Bulgarian Railways' electric multiple unit trains, which were built by Siemens. Interpipe has invested $16.2 million on the development of its railway product manufacturing facilities, according to a press release.

The Railway Supply Institute (RSI) earlier this week issued a statement welcoming Elaine Chao as President-Elect Donald Trump's choice as U.S. transportation secretary. RSI looks forward to working with Chao and the Trump administration to develop policies aimed at enhancing and encouraging investment in the country's freight and passenger railroads, the statement said, adding that Chao brings "knowledge and proven experience" to the position.