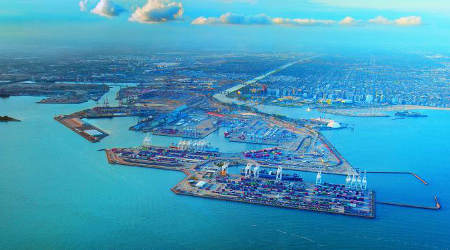 GE Transportation and the Port of Long Beach, California, have wrapped up a three-month pilot of the Port Optimizer technology, which is aimed at improving cargo flow at ports. The pilot's initial outcomes included advanced visibility of incoming cargo, improved turn times with increased throughput, and more productive turns, according to a GE press release. For the pilot, GE launched additional Port Optimizer functionality for marine terminal operator and landside transportation integrations, company officials added. For instance, through a collaboration with Envio360, GE expanded drayage final mile capabilities to include real-time, port-to-door visibility.

Duos Technologies Group Inc. has received a patent for its linear speed measurement technology. The technology allows for "stitching" of images that are a single pixel wide into an accurate, high-definition image of a train with up to 100 cars, Duos officials said in a press release. Without the new technology, images can appear compressed or stretched, which reduces the effectiveness of operator inspections and algorithmic detection of mechanical issues, according to the company. Duos' proprietary design can detect speed differences down to less than 0.01 mph.

Steve Christian this week will retire as Tealinc Ltd.'s manager of value creation-operations. He'll be succeeded by Dan Madden, who previously served as billing supervisor at the Association of American Railroads (AAR). He also worked as billing and estimating manager at the AAR. Madden will be based in Eugene, Oregon.

Aspen Equipment has hired Ron Lamprecht as director of safety, compliance and development. In the role, he'll use an interactive training style to encourage safety dialogue and create an overall safety plan that will reach across departments, company officials said in a press release.