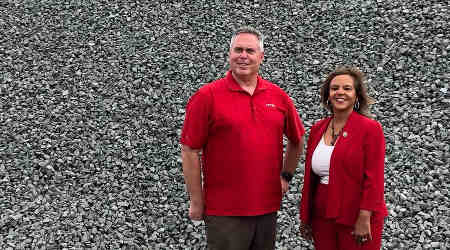 The company produces durable rock suited for railroad applications, including ballast. Ontario Trap Rock is a member of the National Railroad Construction and Maintenance Association (NRC) and the Railway Engineering-Maintenance Suppliers Association (REMSA).

The company uses waterways to transport materials to the Middle River Marine, where it's loaded onto rail cars and shipped to businesses and construction projects across the country. In 2017, Ontario Trap Rock shipped nearly 300,000 tons of aggregate using the terminal, according to a REMSA press release.

During the tour, attendees voiced support for the Building Rail Access for Customers and the Economy (BRACE) Act, which would permanent the the 45G short-line tax credit.

Tour attendees also called for maintaining the current federal limits for truck size and weight, noting that trucks cause more damage than they pay for on U.S. highways, NRC officials said in a press release.