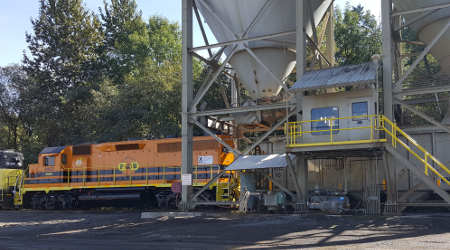 The tour included a discussion of public policy priorities for the business and rail communities in the Salem area. The National Railroad Construction and Maintenance Association (NRC) and the Railway Engineering-Maintenance and Suppliers Association (REMSA) coordinated the event.

Knife River Materials Manager Fred Sondermayer led the tour of the company's Reed facility, a 300-acre sand and gravel pit that produces construction aggregates for the mid-Willamette Valley and Portland areas. The mine has about 25 million tons of aggregates reserves.

The company relies on a multimodal approach to shipping. About a half million tons of aggregates are shipped by rail annually to serve Knife River operations in greater Portland. The facility is directly served by Portland & Western Railroad, which interchanges with BNSF Railway Co., Coos Bay Rail Link, the Central Oregon & Pacific Railroad, the Albany & Eastern Railroad and Union Pacific Railroad.

"I look forward to continuing to engage with those present [on the Knife River tour] as we work together to create jobs in Oregon, spur economic activity across the state, and ensure our communities are safely and efficiently served by freight and passenger rail service alike," said Schrader, in a press release issued by REMSA.

Schrader serves on the U.S. House Committee on Energy and Commerce.