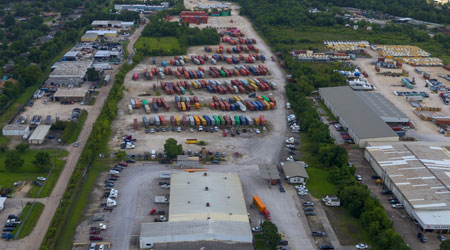 Gulf Intermodal Services (GIS), a member of the IMC Cos., recently purchased a terminal on Wallisville Road in Houston from Empire Land Corp. The depot is located 3 miles from a Union Pacific Railroad line and 13 miles from a BNSF Railway Co. line. GIS can store up to 1,400 full-sized, grounded containers and 500 mounted units on chassis at the 33-acre terminal. The terminal includes a full shop with maintenance and repair capabilities for chassis, containers and vans. The acquisition helps meet the growth needs of Empire Truck Lines, which GIS acquired in March 2021, GIS officials said in a press release.

GATX Corp. named Paul Titterton president of Rail North America (RNA), effective April 22. Titterton will succeed Robert Lyons, who as previously announced will become CEO of GATX on the same date. Currently senior vice president and chief operating officer of RNA, Titterton will also be appointed EVP of GATX on the transition date. Titterton has served as SVP and COO of RNA since August 2018. He's held a variety of leadership and other positions of increasing responsibility since joining the company in 1997.

Savage Co. announced Donald Stebbins has been appointed the non-executive chairman of the board. Todd Savage, who has served in that role since 2017, was appointed non-executive vice-chairman. Stebbins joined the Savage board in 2020. He has served on a number of boards and as CEO of two publicly traded, global companies that manufacture and supply automotive parts, in addition to other leadership roles in the automotive industry and financial services sector.

Keolis North America named Ryan Adams executive vice president of market development and innovation. He joined Keolis in 2012 and most recently served as senior VP of strategic development, where he and his team added significant growth to the Keolis portfolio through new partnerships with public transit agencies across the United States.

RATP Dev USA appointed Stacy Winsett chief people officer. She has over 20 years of experience in producing winning results for Fortune 100 corporations and has diverse industry experience across national and global transportation, airline, manufacturing, mining, oil and gas, as well as equipment rental industries, according to a company press release.

Carboline is marking its 75th anniversary this year. Founded in 1947 by Stanley Lopata in St. Louis, Carboline today produces coatings, linings and fireproofing products in more than 20 manufacturing facilities around the world. The year-long anniversary celebration will involve several events, including "75 Ways to Give Back" in which employees will volunteer in their communities.