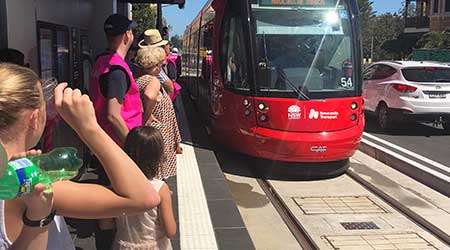 Jacobs and joint venture partners Arcadis and Ardmore-Roderick won a six-year contract from the Chicago Transit Authority (CTA) to provide owner's representative services for the first phase of the Red and Purple Modernization Program (RPM). Work under the phase calls for rebuilding the Lawrence, Argyle, Berwyn and Bryn Mawr stations; replacing trackwork and elevated supported structures adjacent to the stations; creating a Red-Purple bypass north of Belmont Station; and replacing the century-old Clark Junction. Jacobs will provide the CTA program and construction management services for the first phase, including design and construction management, field support and project controls services. Major construction on the $2.1 billion project is expected to begin in the year's second half.

Siemens Canada is seeking electrical and mechanical suppliers, and spare parts technical service providers to help the company fulfill its fleet replacement contract with VIA Rail Canada Inc. In December 2018, VIA Rail announced it awarded Siemens Canada a CA$989 million contract to build 32 trainsets to replace the railroad's fleet that operates in the Quebec City-Windsor corridor. Siemens established procurement offices in Montreal and Oakville, Ontario, and aims to award up to 20 percent in associated supplies and services in Canada. The selection of suppliers and service providers will be based on the total cost of ownership, quality and delivery schedule, Siemens Canada officials said in a press release. Supplier applications are due March 11.

Rail-car leasing company RGCX has named Mike Keasling vice president of sales and marketing.  Based in Chicago, he will be responsible for the firm’s existing accounts and developing new client relationships. Keasling has more than 30 years of experience in the rail-car leasing industry. He spent much of his career at CIT as senior VP of rail leasing and also held various leadership roles at GATX, GE Rail, ARL, US Bank and, most recently, CAI Rail Inc., where he was VP of marketing.

Keolis' Australian subsidiary Keolis Downer has begun operating a light-rail system in Newcastle that's part of the city's multimodal transport network. The 1.7-mile line features six stations and runs between Wickham and Pacific Park. Operations started ahead of schedule, Keolis officials said in a press release. The milestone reinforces the company’s presence in Australia, where it has introduced and operated light-rail networks, buses, on-demand transport systems and autonomous electric vehicles since 2009, they said.

ABB landed a more than $42 million contract from Diesel Locomotive Works to supply converters for electric locomotives in India — ABB's largest traction equipment order in that nation. The converters will be designed for the Indian Railways and manufactured at one of ABB's largest factories for locomotive applications in southern India. The traction converters will be based on the latest technology to bring more reliable trains to passengers, while increasing sustainable transportation from diesel to electric trains, ABB officials said in a press release. Last year, the Indian government approved plans to fully electrify the Indian Railways by 2022.