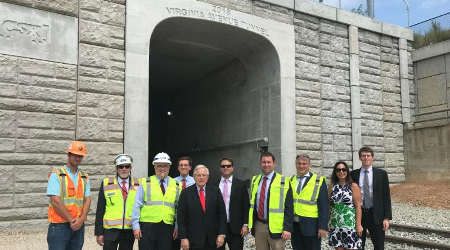 The project calls for replacing a 3,800-foot, single-track tunnel built beneath Virginia Avenue in southeast Washington more than a century ago with two larger one-track tunnels. At 4,100 feet long and 21 feet high, the new tunnels will be tall enough to let trains carry two freight containers stacked on each car. Double-stacked trains can carry twice as much freight as a single-track train.

Construction began in May 2015 and the first tunnel was completed in late 2016. CSX expects the second tunnel to be finished this month and the entire project to be finished in October, according to an NRC press release.

The construction is being managed by joint venture partners Clark Construction and Parsons, with Delta Railroad Construction performing the subcontracted rail work.

"CSX's Virginia Avenue Tunnel project is a great example of a private railroad investing private money, assisted by private contractors, to improve America's rail infrastructure," said Batory. "This project will complete the railroad's National Gateway project and make the rail network safer and more efficient, which helps railroad customers, the consumers of the goods shipped by rail and the American economy."

The Virginia Avenue Tunnel project will be the final of 61 projects that CSX needs to be completed for its National Gateway corridor. It is designed to improve rail connections between ports in the U.S. mid-Atlantic seaboard and the Midwest by upgrading bridges and tunnels to allow double-stacked trains.

Besides Batory, those in attendance at this week's tunnel project tour were Peter Cipriano and Chris Hess of the Federal Railroad Administration; Owen Morgan and Deva Tucker of the U.S. Department of Transportation; Anne Reinke, Peter Shudtz, Chuck Gullakson and Steve Flippin of CSX; Phil Sheridan of Clark Construction; Ryan Wayslaw of Delta Railroad Construction; and Matt Bell of the NRC.