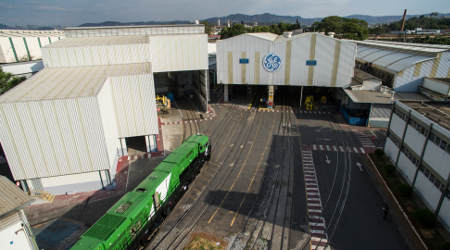 GE Transportation has begun building locomotives with a mixed-model moving assembly line at its plant in Contagem, Brazil. Unlike traditional stationary product lines, the moving line is designed for workers to assemble different locomotive configurations on the same line as the units slowly move down the track. The new system is aimed at boosting productivity and optimizing the workforce. In particular, the assembly line will cut lead time by about 20 percent,  reduce inventory by $1.75 million and create more space savings in the factory, GE officials said in a press release.

Trinity Industries Inc. has announced plans to spin off the company's infrastructure related businesses to stockholders in the second half of 2018. Antonio Carrillo, currently chief executive officer of Mexichem S.A.B. de C.V. and a member of Trinity's board, has accepted a forthcoming role as president and CEO of the new infrastructure company when the spinoff is completed. Trinity Chairman, CEO and President Timothy Wallace will remain in his role after the spinoff. Trinity's portfolio of businesses then will be composed primarily of rail-related businesses, which include rail manufacturing, leasing and services.

Mike O'Malley yesterday began his tenure as president of the Railway Supply Institute. He takes the reins from Tom Simpson, who has retired. O'Malley is a former vice president of CSX. From 2002 to 2007, he held various roles with the U.S. Department of Transportation. O'Malley is "ready to move RSI's agenda forward as he leads the association's efforts to support, connect and advocate for railway suppliers," said RSI Chair Pat Ameen, who also serves as vice president of industry relations at Amsted Rail.