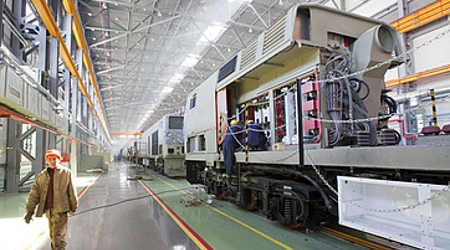 Wabtec Corp. has signed a $5 million contract to design, install, test and commission a yard train control system for Brazilian freight railroad RUMO. Under the agreement, Wabtec will provide its train management and dispatching system associated with wayside signaling interlocking, training and systems integration. Installation is slated to be completed by 2018's end. The system will help boost safety and efficiency at a port in Santos, Sao Paulo, Wabtec officials said in a press release. In addition, the initiative will enable the port to prepare for future technology upgrades and to integrate with other railroads.

ABB has been selected to provide key components for power distribution for Toronto's Eglinton Crosstown light-rail project. In particular, the company will deliver a medium-voltage distribution and traction power system, including gas-insulated switchgear and substations. ABB will work with the Crosslinx Transit Solutions Constructors consortium to complete the 11.8-mile Eglinton Crosstown project, which is expected to begin serving passengers by 2021.

Strato Inc. recently hosted 10 Rutgers University students for a manufacturing tour in New Jersey. The students, who are members of the Society of Manufacturing Engineers, spent an afternoon with Production Manager Dave Calico to learn about manufacturing in the state, Strato officials said in a press release. During the tour, guests viewed high- and low-tech production equipment used in manufacturing, along with test equipment used for product development and quality assurance. The event helped students "visualize what manufacturing is really like outside of a classroom," said Strato Director of Engineering Jason Reiling.

Advanced Polymer Coatings Inc. has promoted David Keehan to president. He most recently served as the company's vice president of sales and marketing — a position he held since 1993. During his time with Advanced Polymer Coatings, Keehan introduced, promoted and sold the company's coating brands ChemLine® and MarineLine®. As president, he will provide strategic leadership for the company as he works with the management board, employees, partners and key managers to establish long-range goals and policies.